Wondering what's open? Read the latest on what to expect in Boulder during COVID-19.

Wondering what's open? Read the latest on what to expect in Boulder during COVID-19.

Click on a trip item for more information or click the 'X' to remove, or go directly to the Trip Planner

See Your Trip
Hiking the Flatirons 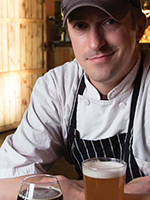 Ian Clark is a man of many talents. He is a chef, a brewer, a gardener, a beekeeper and a modern-day MacGyver. He attended the New England Culinary Institute and went on to work in acclaimed restaurants across the country before falling in love with Boulder. After years honing his culinary techniques in the kitchen and devoting endless hours to his home-brewing passion, he started his entrepreneurial career by opening a brewery, BRU, from his garage. BRU quickly moved and expanded to its full gastro-brewery glory, where he brings both his passion and knowledge of food and beer under one roof.

Ian has also won numerous awards and accolades over the years for his cooking and brewing, including a national TV appearance on the Cooking Channel’s “Unique Eats,” the silver medal at the 2014 Great American Beer Festival for his LOCH Wee Heavy Scotch Ale, Best Brewpub from Westword and a spot among the “6 Beer and Food Innovators” named by Draft Magazine.

My Perfect Day in Boulder: